The Signature Series--Eight Years of Collaboration and Growth

In our third decade together, lots of circumstances affected our repertoire and configurations.  One very fruitful circumstance was our partnering with Falcon Theatre of Newport, KY and the Campbell County Public Library on a new series entitled Signature Series.  The collaboration was originally the brainchild of the adult programming librarian at the main branch, Janet Arno.  She had worked with Raison D’Etre on ArtsWave programs, plus attended Falcon’s productions and hosted their shorter productions at the library.  Signature Series productions were author presentations, concerts, or short theatrical programs.  What if one of the programs each season could merge all three art forms? A brilliant idea was born.

Our very first presentation was a reader’s theater production called Soldier, Come Home.  The playwright, Frank W. Wicks, had discovered some Civil War era letters from his ancestors.  He shaped them into a short reader’s theater format—a form where actors read from a script in black clothing, without costumes, blocking or special lighting. This form puts artistic focus on the words.  Raison D’Etre was invited to participate because we already knew an entire set of Civil War songs from our tenure at Liberty on the Border.  Janet reserved tickets through the library’s website, holding the attendance to 200 or so.  The event quickly “sold out.”  The local audience seemed very much interested in a short play with some well-chosen music about something of historical or literary significance. 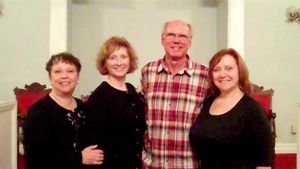 For the next production, we stuck to the historic focus using a poetry collection from a Kentucky professor entitled Beyond the Blue Mountains which was a fairly harrowing tale of a family’s efforts to cross the Oregon Trail.  The author, Jane Wilson Joyce, was invited to attend the performance.  A new tradition was in place.  The poet also stayed after to sign copies of her book. Raison D’Etre added several new-to-us songs from the era like “Bound for the Promised Land,”  and “Wait for the Wagon.”  Fortunately, these songs dove-tailed nicely into our cowgirl set for the ongoing Old West Festival the next fall.

For the third collaboration, we returned to a play of Mark Twain’s sketches and monologues, a two-act revue in which we departed some from the reader’s theater format to allow for costumes.  Violet Rae and Roberta performed as a duo for this collaboration and fashioned our musical focus around songs that appear on Mark Twain’s music stand at his historic home place/museum.  That was a lot of fun as we got to make “Arkansas Traveler” the theme song as well as incorporate “Aloette” into a French duel scene.  Plus, “Beautiful Dreamer”  became one of our favorite songs to sing. 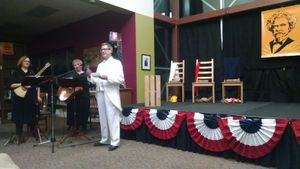 We flipped back to poetry for the next year producing a reader’s theater version of George Ella Lyon’s Many Storied House.  The most exciting part of doing the music for George Ella’s book is that she advised us on which songs she would like included.  Since the text already made so many musical allusions, it was a wonderful set of music to gather up.  We sang “Waltzing Matilda,”  “Leaning on the Everlasting Arms, “ “500 Miles,” and even a beautiful song called “Lineage” written by George Ella for the theme intro and outro.  It was rough for Roberta and Violet Rae to perform most of the songs for Many-Storied House since our mother died the week of the production.  And it was rough for Vickie to make it to many of our performances in 2015-2016 since her husband, Bruce, had a stroke that required he have round the clock care. Before, whenever we’d performed as a duo, it had been because of Vickie’s Playhouse work commitments.  Now, Violet Rae and Roberta would face a few years of performing many times as a duo. 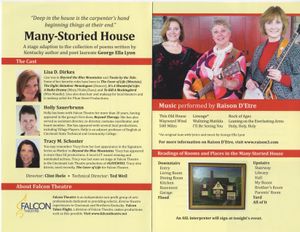 Rafting Rise was our next project, a poetry collection based on logging in early 20th Century Kentucky.  Our homework assignment was to find some period logging songs which we did in “Jack Haggerty,” “Pay Me My Money Down,” and “The Log Driver’s Waltz.”  However, Roberta got inspired by Kentucky poet, Joe Survant’s words.  So, she decided to contact him to see what he thought about her setting some of the poems as songs.  For the production, we included  songs called “Sallie,”  “We Come Together Again,” and “He’s Already in Love,” musical settings of Joe Survant’s words—a whole new avenue for musical expression.  Violet Rae and Roberta performed this one as a duo because of Vickie’s ongoing struggles to keep Bruce healthy.

Vickie was able to join us for the next year’s collaboration when we took on another series of letters entitled Letters from Viet Nam, edited by Bill Adler.  We selected songs from the 60s like “Sounds of Silence,” “The Times They are a Changin’” and “Ballad of the Green Beret.”  But probably the research find for us was locating a song written by an actual Vietnamese folk singer called “Rice Drum Song.”  It was so much fun to harmonize to the pentatonic melody and to use an actual frame drum for the performance.

In 2019, Clint Ibele, the director of all these productions, made an appointment to meet poet Maurice Manning in his office at Transylvania University.  Together they discussed how Manning’s Pulitzer-nominated collection, The Common Man, might translate to reader’s theater. Manning also had several song recommendations which we immediately began to research.  Not only did we learn some fun tunes like “Banjo Picking Girl” and “Bile that Cabbage Down” but we included the trad song “Talk About Suffering” which has become a staple of our 30 Years Together set.  The best thing about Maurice Manning attending the production is that the audience got a big surprise when he took the stage to read the final poem.  We had so much fun doing The Common Man that we also took it down the road to Maurice Manning’s hometown for a one-night performance at the West T. Hill Theatre. 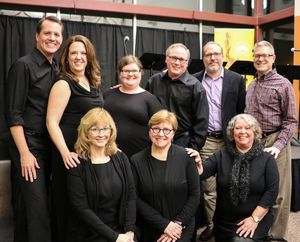 Right before everything shut down for the pandemic, we were making plans to take Pauletta Hansel’s Coal Town Photograph on the road to Hamilton and Dayton, Ohio.  After a a very well attended performance at the library in January of 2020, many Appalachian Studies programs were hoping to present our reader’s theater production of Pauletta’s wonderful poetry.  At least we were able to celebrate her words for a large audience once before the pandemic locked down all such hopeful and necessary gatherings.

Falcon Theatre produced three of these reader’s theater projects online as slide show videos if you’d like to revisit them or hear them for the first time.  We added whatever recorded music we could muster.  You can find links to them on our home page. 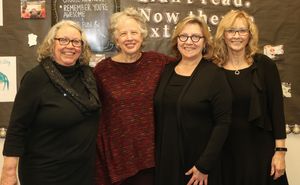 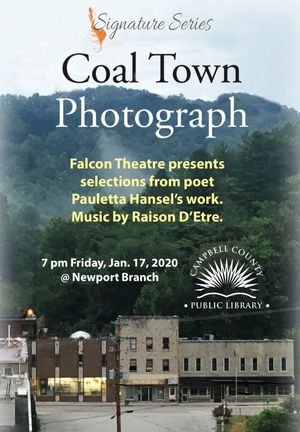