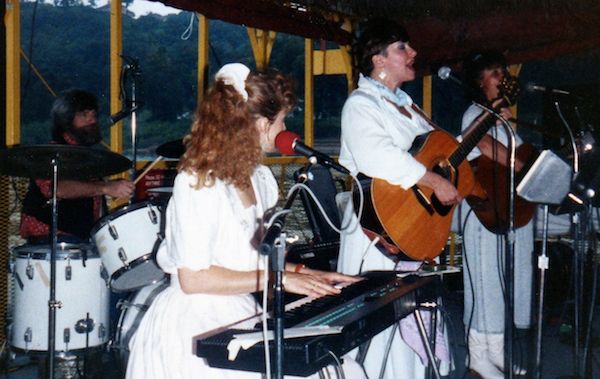 It all began after two summer seasons playing on BB Riverboats' "Hoe Down Cruise."  We were the front women for a band named-- just for the occasion of party-barging up the Mighty Ohio River--Runaway Stage. We played a mostly country setlist of harmony favorites from Dolly Parton, Emmylou Harris, Linda Ronstadt, and the Forester Sisters backed by the country rock sass and slap of Don Clare on drums and vocals and Dan Wilson on bass and vocals.  I'm pretty sure we slipped in a few country rock originals from Dan and Don along with choice Pure Prairie League hits.  While there's no record of our actual setlist, I definitely remember Violet and Donnie singing a duo on "Islands in the Stream," and I know we did a three-part version of "I Fell in Love Again Last Night" by the Forester Sisters.  One song I am very sure we included was "I Will Always Love You" as our docking song.  We knew it was the end of the cruise when we could spy the lights at the BB Riverboats landing which was then located in Covington, KY.  The captain would make an announcement, we would start up the last song of the evening, and by the last notes of Dolly's signature tune, we held onto the mic stands so we didn't fly off the edge of the Kontiki party barge as we smacked into the dock.  Some nights, it was just a love tap.  Some nights, we had to tax our quadriceps just to stay upright. On one of our final nights, it rained so much that it took us a few weeks after the cruise just to dry out our gear.

The cruise ran two seasons in June-July 1989-1990 as a dinner package.  We had a fabulous lead guitar player the first summer named Brian who couldn't commit to the second season, so we called on the chops of longtime friend to Dan and Don, Skip Cason, allowing us to add a few more originals to the mix.  At the end of the 1990 season, BB decided to move on to a different themed cruise for the following summer.  But Vickie, Violet Rae and I were not through singing together in a group.  We loved the close harmonies we had already learned in our previous family band from the '80s, Mudpuppy.  And now we had a few more harmonies to add to that list.  So we walked off the Kontiki in 1990 with the plan to continue as a trio.  Maybe this time not a country trio or a soft rock trio with side men, but a real trio where we played all the instruments, sang all the parts, wrote our own tunes.  We didn't know it yet, but we were taking the steps toward discovering our reason to be.